Toys R Us R No More 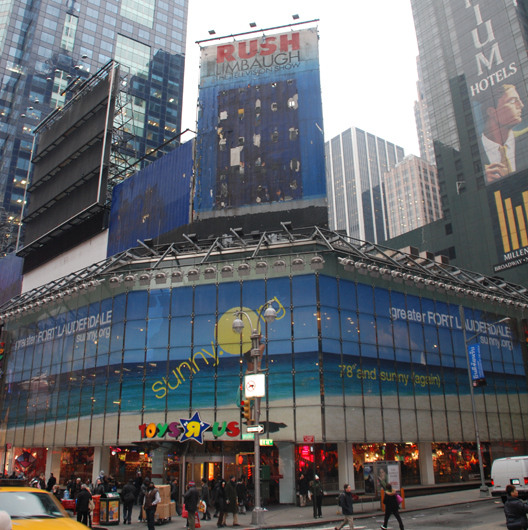 Ah, just found out via Facebook that Toys R Us won’t be renewing it’s lease at the Times Square location when their lease is up next February.  It’s been about 15 years since a young grimmy (eh, not that young) helped with the programming and installation of all the fun in that place.  I wonder if the custom control system is still running Macromedia Director?

The outside scrollers were a lot of fun – the genius of Dennis Flood who I ended up working with at VideoSonic a few years later.  In fact I think Glenn Polly (of VideoSonic) helped with the installation as well.   Lots of cool time spent there — met Steven Spielberg when he came to check out the Jurassic Dinosaur (I can’t remember if we could access it’s playlist from the control system).  The outside video displays are merely mapped QuickTime movies (not to take away any of the magic).

At one time I also coded some software where photos could be taken inside and displayed on the external displays with a message to Times Square — but I don’t think they’re using that anymore.

It was a fun time, but sadly an end of an era; soon any use of it as a reference of work will be lost to the ether.  Still, I can’t even wrap my head around the amount they must be paying for just the rent based upon these numbers:

The asking rent on the ground floor in the 150,000-square-foot building is $2,500 per square foot, $150 per foot on the lower level and $350 a foot on the second floor, the broker said. Toys R Us is paying about half that since commencing to rent at the location in 2000, Mr. Mendelson said.

You can read about it in my portfolio: https://www.grimmwerks.com/portfolio/toys-r-us/