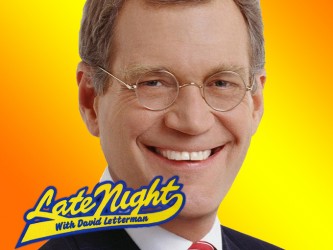 Honestly it’s been years since I’ve watched any real late night ‘talk show’ but I feel now, as a man closer to my 50’s than my 20’s that tonight there’s going to be some sort of mechanism — some sort of rollover — some large metal lever will be turned and the late night human consciousness will be reset.

I actually remember the really early days of David’s career — I was very young (think I was 12) and on a vacation with my parents somewhere and turning on the television one morning and seeing this very flat nosed, wild-haired gap toothed stranger reading some small town news. It stuck with me then.

Dave and I got reacquainted when Late Night took over Tom Snyder’s ‘Tomorrow Show’ slot after Carson’s Tonight Show.  I think in a way the fact that I still like to work alone at night while my family sleeps — that behavior was begun and forged in my late teen years.  I never watched the Tonight Show — it seemed too much like my parents — and instead turned on the tv after today became tomorrow — 12:30am.   Dave’s dry wit fit well with my own, and I felt in a way he and I were sharing a joke that not too many people were a part of; the cynic, the joker, the guy that realized none of this really mattered but let’s hang out together anyway.

Growing up when I did I think we first got cable in 1980 but it certainly wasn’t 3000 channels of content — and at one point I think we dropped it and it was back to the basics — and Dave was always there.   When I’d have sleepovers at my friend Joseph Griffo’s house we’d stay up to see what tonight’s exploits would bring – would some regular like Larry Bud Melman be on, or wacky guests like Andy Kaufman or Harvey Pekar…  I was watching when Crispin Glover emoted to the audience that he was a real man and he “could kick” while trying to keep his odd wig on his head, his platform shows swept inches from Dave’s face before he went to commercial.  After commercial, Crispin was no longer there and nothing was said again about him.

I watched the ‘late show wars’ as David wanted the Tonight Show, didn’t get it, watched him on CBS in the same time slot of the Tonight Show (but something was a little more ‘grown up’ at that point — perhaps it was Dave, perhaps it was the time slot) and got to know the new guy with the name on the door — Conan — but after some time with Dave on CBS I started to move away from the talk show format  – though tuning in with fascination when Conan took over the Tonight Show only to be kicked back out by Jay Leno, watching the brotherhood form between Dave and Conan.

I don’t know how to put this but there seems to be something that’s changed in the zeitgeist of the late night talk show format: the kids that are around today – Fallon, Kimmel, Meyers — they grew up with Dave’s cynicism and self awareness as well, but they don’t seem to exude the same ‘anti establishment’ that Dave once did.  Maybe I’m going to sound like the cranky old man now but they seem to have ingested what they learned and ARE the establishment now — the reality show, Kardashian, selfie mentality; though they’ve been raised on Dave’s schtick it seems a little too much like pablum, that they’re not in on the joke — that none of this really matters but we might as well put on this show anyway.

Now Conan is the old man of late night television.  That just seems like a weird thing to say given I remember his pasty faced nervousness the first time he sat in a chair that was still warm from Dave. I think part of why this affects me so is I’m far from the 12 year old I was when I first met him.

I’ll be tuning in tonight to say goodbye Dave.